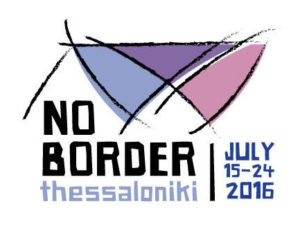 Thessaloniki 15-24 July 2016. “Fences and borders are being built not only in the physical space, but also across social relationships.”

Today, with neoliberalism established across the planet, it is clear that capitalist relations are being intensified, together with nationalism and patriarchy. Fences and borders are being built not only in the physical space, but also across social relationships. However, the movements and transnational struggles of migrants are constantly producing new cracks in the system, new thresholds and pathways into an unexplored world.

More specifically, transnational and global agreements further liberalize “free” markets and the lifting of tariff restrictions further ensure property rights for the wealthy. At the same time the former social contract of the welfare state is breaking down and the neoliberal state is claiming the role of manager-partner of companies, keeping for itself solely the army and the police in order to retain some of its administrative and legislative power. Gender oppression, racism and fascism are being remobilized for the control of populations.

However, social struggles in the form of riots, rebellions, campaigns and movements both before and during the process of this recent “crisis”, seriously challenge all this. Prime examples are the riots in the French banlieues in November and December 2005, the Oaxaca Commune in 2006, the riots in December 2008 in Greece, the magnificently widespread Arab Spring in 2011, the Indignados Citizens Movements in Spain in 2011, the London riots in 2011, the “Occupy” movement in the USA in 2011 and 2012, the uprising at the Gezi park in Istanbul in June 2013, the Brazilian Spring in 2013, the uprisings in Bosnia and other Balkan States during 2013-2014.

The response of neoliberalism to the recent structural crisis, one that is interpreted by some as a crisis of over-accumulation, by others as a result of civil disobedience, or as the long expected explosion of “abstract labor” in a fully monetarized economy, to extend and intensify its strategy of land-grabbing and pillage of resources, of means of production and of reproduction of whole societies.

Austerity programs in the countries of the European South, war, religious intolerance and the intensification of gender oppression in the countries of the Arab Spring are part of the same strategy. Thus, whole populations are made to abandon their homes. These people, deprived of their natural and social space, migrate, cross borders, fences, barbed wire, rivers, seas, mines and police patrols. They also face exploitation by traffickers, they are detained in concentration camps and then they are forced to search for a job (usually in the black market, often unpaid) even under extremely dire conditions. Most end up unemployed and they form a kind of reserve workforce or are forced into prostitution, trafficking networks and organ smuggling.

While more people need to move, more fences are being built. Fortress Europe rises from the ashes of its own crisis by using police procedures and policies of control, imprisonment, pushbacks, illegalization and penalization of the populations in motion. Police and military operations are intensified, N.A.T.O enters the picture, discriminations between immigrants and refugees are constructed and finally concentration camps, hot spots and pushback centers pivot the management of migrant people.

Migrants moving from Africa and the Middle East towards Europe have challenged and fought against borders and national and supranational policies in practice. During the last months, hundreds of thousands of populations have crossed borders, and the movements for solidarity and emancipation are flourishing. The migrants’ movement with all its inventiveness and ingenuity proves that desires, social relationships and dreams cannot be imprisoned. Their power goes beyond borders and fences.

It also shows that the motives for migration are mostly to be found in the complex intersections of gender, ethnic, cultural, religious or class discrimination and oppression. Populations in forced mobility develop survival strategies, activate subjective capabilities, coordinate social relationships with other moving people and simultaneously, they create social networks with those they leave behind.

Therefore, we believe that we should understand but then go beyond the idea that perceives the state, capital, patriarchy and racism as totally dominant upon human subjects, and hence also immigrants as submissive victims in need only of charity, compassion and saving.

In the last few months, immigrants and people in solidarity with them have met within and beyond the kaleidoscopic fields opened by the crisis. We believe that meetings and struggles should be encouraged, should acquire steady and lasting structures and reinvent the joy and the charm of companionship and sharing.

For all these reasons, we think it’s crucial that we organize an international No Border Camp this summer in Thessaloniki.

As for the choice of the specific city, Thessaloniki, it finds itself at the core of conflicts over the control and management of immigration and of the freedom of movement, due to its geographical position in northern Greece, bordering Albania, Rep. of Macedonia and Bulgaria, with many detention camps and pushback centers at its perimeter. In northern Greece as well as in the wider Balkan area, initiatives and solidarity networks have emerged during the last few months that can empower and be enhanced by the organization of a No Border Camp here. Finally, we think that the need for the coordination of various local political collectives and also its available movement infrastructures make Thessaloniki a suitable and reliable choice for the organization of a global and transnational No Border Camp.