Potsdam, Germany,
1st to 8th of September
In the frame of this activity, 28 participants from 12 countries met for a week to explore effective and inclusive campaigning which highlights the role of war as a root cause of migration. 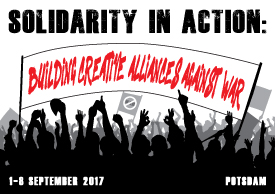 Sharing experience and knowledge with each other helped us to point out the role of Western countries in war and armed conflicts all over the world. We aimed to understand the links between our political and economical systems with severe conflicts and war in other parts of the world which cause flight and migration. With a great input from the participants of the activity happening in Armenia in July, we not only wanted to highlight how war can be seen as the root cause of migration but also how women* are especially affected by war and how we see the interconnectedness of feminism and anti-militarism.

The weekly programme was filled with discussions, workshops, presentations and preparations before the final theater performance. We started with sharing the stories about our backgrounds, experiences and politics, which have shaped our current opinions and statements. It let us get to know each other better and understand the similarities, but also the differences. Then we opened the topic of involvement; how to organize actions and campaigns. The inputs of young people from the regions affected by military conflicts and/or involved in solidarity actions helped us understand the idea of inclusiveness, allyship and gender awareness. Thanks to that we felt ready to plan something together – starting from brainstorming, through consensus decision making process, active listening and task and role division to talk about political message. As a result we created a theater piece together, meant to be presented to the local audience. Rehearsal time brought us not only fun, but mostly the awareness of our bodies – as a tool extremely useful in anti-militaristic and gender equality struggles. Parallel to the performance rehearsals we started to work on our anti-war campaign which will be launched soon – watch out for it on our twitter! – and promoted by several info-tours to different countries. The whole week ended with evaluation, both group and personal.

Supported by
This project was made possible with the financial support to the European Youth Foundation – Council of Europe.