This international youth exchange took place in Wojtowice (Poland) and was dedicated to young women* (including a variety of identities, e.g. transgender, gender non-conforming people, cis-women – but no cis-male people). It brought together 20 participants from European countries to share skills and experiences, through non-hierarchical learning processes, on achieving equal opportunities in employment and making employment more accessible to youth. 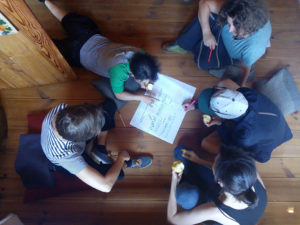 The 7 day camp was filled with both theoretical sessions and practical explorations of the application of European labour rights.

The first two days of the event were dedicated to the participants’ exchange of stories and experiences they have with gender-based discrimination in the workplace, to share perspectives on discrimination and to build alliances and networks.

Later on we moved to the main content, focused on the concept ‘economic exclusion’ and continued as an extended series of sessions dedicated to the key aspects of European labour rights. For people the most valuable parts were those about sharing their local contexts, as they were able to compare them, discuss about opportunities, strengths and weaknesses (like the one about unemployment or limited access to the workplaces) and discover both differences and commonalities across contexts and borders.

Last day sessions presented the basics on self-organised employment and collective labour rights and prepared people to the video glossary making; they started with building a common vision and carried on with people’s contributions.

Taking the advantage from the beautiful surrounding people were encouraged to take care of themselves – connect to the nature, have some rest, walk or hike around or simply do nothing. 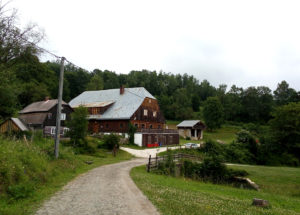 a) Strengthen non-formal education as a tool for young activists to cooperate towards claiming and protecting their equal social rights;
b) create a safeR space where young women* can exchange their experiences, knowledge and their skills in a non-hierarchical way
c) provide participants with competencies to mobilize for their European labour rights and other social rights
d) build networks and solidarity to combat intersectional discrimination, social and economical hierarchies.

During the week people increased their understanding of European labour rights and learned about the labour markets in different countries. By sharing the experiences they were given a chance to reflect more on the topic of gender-based discrimination in order to be able to identify and combat it in their workplace.

One of further explored options were various forms of self-organized employment; participants deepened their knowledge and critically analyzed them, especially from the perspective of queer or no cis-male expression/identity.

Undoubtedly the camp itself let people learn and practice non-formal and participatory education methods; by providing the room for creating the program together (participants facilitated the sessions), sharing the responsibilities for the outcomes and contributing to the learning environment of the whole group.

We hope we all laid the ground for further collaboration of FLTI* people in networks across Europe.

This project was made possible with the financial support of the European Youth Foundation – Council of Europe and Alert fonds voor jongeren.