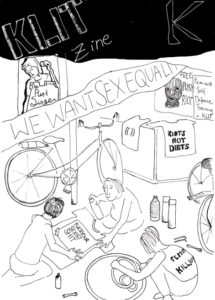 What happens when you find yourself between the oppressive heteronormative culture and the mainstream LGBT movement that is often prone to sexism, racism, homonationalism and celebrates homonormative values? Is there any alternative? Yes, there is! Radical queer feminist activism is what you need when you feel you have enough of giving up on the behalf of any majority.

The Radical Queer Affinity Collective started out in Budapest in 2011 with the critical question of how to do queer politics in the situated context of Central Eastern Europe. We believe that queer politics is not a uniquely Western concept, as it might seem from the theoretical and academic knowledge production that focuses mostly on the US context. Queer revolt can happen (and does happen) here and now, so we wanted to explore the significance and complicatedness of this kind of political action in the CEE context and build transnational queer solidarity in this region. We thought: what better way of addressing queer anarchism than just by practicing it!