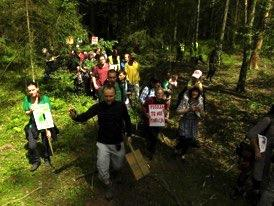 SAVE BIAŁOWIEŻA FOREST!
This call-out for solidarity and action reached us from our comrades in Poland who are fighting to save Europe’s ancient forest.

what is happening?
Large scale state-sanctioned logging destroying Europe’s last primeval forest. After years of efforts to limit the scale of logging and increase the amount of protected areas in Białowieża Forest, the current Polish Government has taken a
radically different direction. Using the outbreak of the spruce bark beetle as an excuse, intensive logging has begun in pristine parts of the Forest. In the first four months of 2017 over 10 thousand trees have been cut down in parts of the Forest with the oldest, over 100 years old trees. The recently imposed legal ban on entering major parts of the Forest serves to prevent citizen control of the intensified logging. Białowieża Forest, the last natural forest of European lowlands, the UNESCO World Heritage Site, home to European bison and thousands other species, is now in danger.
what is our response?
We have set up the camp to stop the devastation of the Forest and advocate for turning it into a national park.
In the face of intensified logging direct action is needed. In the last three weeks we’ve blocked the logging four times, the last time for 36 hours, by chaining ourselves to harvesters: heavy-duty tree-felling machines. We’ve organized citizens’ walks, where over 1000 people violated the ban to claim their right to the Forest and to reveal the scale of logging. We have contacted the media, who have joined us during the protests and walks and are informing the Polish and international audience.
In order to protect the Forest, we urgently need to increase our efforts. This is why we set up a camp, a self-organized place, which is a base for continued action, which fosters peaceful resistance and educates about the struggle to protect the Forest. This is why we ask for international solidarity, because we need mass mobilization to stop the devastation.
what can you do?
→ Join the International Solidarity Week (3-9 of July) and organise locally a demonstration or happening demanding full protection of the Białowieża Forest. This week, UNESCO meets in Cracow to discuss the future of the Forest as a World Heritage Site. Let them know that the whole world is watching!→ Come to Białowieża and join us, we need as many people as possible to build the critical mass!
→ You can stay in the camp and we also recommend local housing and local restaurants in order to support
the local community which is struggling because of government actions
→ Spread the word and ask your local media to contact us, to put the Forest devastation in the spotlight
→ Support us with a donation to fund organisation of the camp, materials needed for peaceful actions and legal aid for the activists.
who are we?
A group of activists, supported by environmental NGOs, scientists and the local community. What brings us together is a commitment to protect the primeval Forest as a common good, defending it against the exploitative logic of the market.
contact
co-ordination of the international solidarity week: Joanna Pawluśkiewicz, joannapawluskiewicz@gmail.com
info on logging in the Forest & planned activities: adam.bohdan@wp.pl
the camp: dlapuszczy@gmail.com
profile: fb.com/dlapuszczy
twitter: @DlaPuszczy
crowd funding campaign: pomagam.pl/dlapuszczy