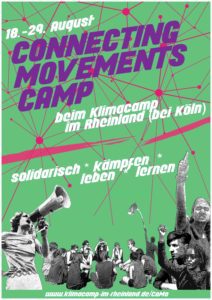 Connecting Movements Camp 2017 in Rhineland
Between the 18th and 29th the Connecting Movements (CoMo) Camp in the Rhineland is connecting people engaged in different social movements and struggles, to develop new perspectives of an emancipatory politic. Very often we are fighting with different focuses – climate justice, freedom of movements and right to stay, (queer-)feminism or food sovereignty – in various places and there is little time left for exchange.
But the more diverse our backgrounds are, the more we can learn from each other! We want to discuss about questions, utopias and strategies of different struggles. The CoMo-Camp will open a space for networking and reflection, to empower us for collective actions and to enable a progress of social movements!

2. Open Spaces
At the CoMo-Camp we want to work especially with open space-formats to enable a non-hierarchical exchange beyond the role of experts. Topics of discussion or workshops can be proposed by everybody and conducted in self-organization. In the daily structure two open space slots are included and in open air or in workshop tents there is space for your proposals.
There is also an information tent, a tea tent, a kitchen, medical structure and places of retreat. The political must not just be seen in the form of content, theory, facts or political actions, but also takes place when we sit in cozy corners, art, theater and common care-work. Suggestions about topics and proposals – from workshop, lectures, networking to movies, concerts and theater – you are very welcome to tell us in advance:
connecting-movements-camp@riseup.net
And why the whole thing?
Climate change, landgrabbing, inhuman deportation policies, sexist harassment of women* are just of few points of sad everyday lives. They are all related to certain systems of oppression and hierarchies that are intricately entwined. Climate change and its social and ecological consequences cannot be solved in a patriarchal, capitalist, racist… society that is based on exploitation, forced competition, oppression and marginalization of people. There is a need of alternative forms of living together which is based on freedom, self-determination, food sovereignty and solidarity. The best way to develop these is together!
Also, we ourselves are not free of oppressive behaviors and ways of thinking. Capitalist values, patriarchal norms and socialized roles are partially deeply rooted – how strong are we reproducing these norms in our daily life and our political practice? After all we do not only want to talk about solidarity, but we want to try to make it practical and create a barrier-poor space together. For that we need all of us!
4. Why in the Rhineland?
The Connecting-Movements-Camp will be organized in collaboration and next to the climate camp. Thousand tons of CO 2 are emitted daily in the biggest brown coal area in Germany. Villages are devastated and the coal miners are left with an unknown future. But with the climate camp the resistance is growing since years! Social and economic questions are brought together and alternatives are opposed to the capitalist system.
In 2015/16 topics around anti-racism, queerfeminism and agriculture were discussed in thematic barrios. Here we want to tie up. We want to discuss topics around and abroad climate in the Rhineland, invite more emancipatory movements to this symbolic place and fight, live and learn in solidarity!
5: Short info
Connecting Movements Camp: 18.-29. August 2017
18. – 23. August: eduction and networking
24. – 29. August: days of action in the Rhineland
The exact place of the CoMo -a and the climate Camp will be announced shortly before the camp starts at the homepage
www.klimacamp-im-rheinland.de/CoMo
The preparation team is open for all people interested! Write us an email to:
connecting-movements-camp@riseup.net